Welcome to BrianPickell.com. Brian's tunes are travelling the world, and he has just launched a special project CD of new clawhammer banjo/fiddle tunes to go with the first two Brian Pickell Band recordings. Although he has been on the roots music scene for three decades, the past three years have been the most exciting. 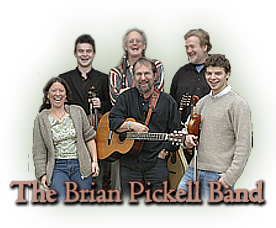 Find out more about the band here! 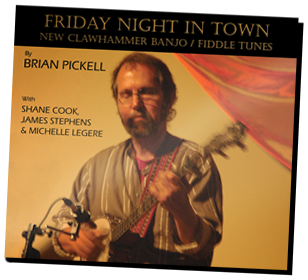 This is a special project. In the late winter of 2008, after many years of not playing banjo (due to tendon problems), I popped open the case. The winter had been long and dark and was not about to give up, so holding my Wildwood frailing banjo felt wonderful.like the return of an old love. Soon I was playing every day and the joy was back. New tunes began to pop out and in no time I was tripping over them all around the house. Something had to be done and this CD is the result. It represents a very heartfelt visit to the instrument and music that really got me going so many years ago... a satisfying circle. The tunes and songs are, with one exception, informed by the tradition and my own journey as a composer/player.

Heartfelt thanks to James, Shane and Michelle, whose support, encouragement and superb musical abilities took this project from a tingle in the back of my mind to a reality. They have each imbued it with their own unique and indelible spirit. I also want to thank Kate Murphy for teaching me how to play clawhammer banjo and for many years of music and friendship.